After Ivory Coast the next hot spots in 2011 in Africa:


- Cameroon where Président  Paul Biya after 28 years as president and 50 years of government is presidential elections candidate for his succession;

President Paul Biya the current tenant of the presidential palace


- Egypt where President Hosni Mubarak wants to transform the presidency in Family story.

President Hosni Mubarak, the current tenant of the presidential Palace


- Zimbabwe  where whites want  back theirs farms heritated by their fathers who take those lands by force from black people in order to put  blacks in bondage again with the support of the current Prime Minister Mr Tsangaris imposed by the Western international community.  Fortunately, his Excellency Robert Mugabe is still alive and will fight as a vaillant African man to overcome this mahievelic plan. 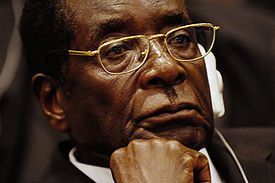 President Robert Mugabe, the national hero who has ousted colonial power out from the coutry,  land reformer, he is giving back the land the colonial master has taken by force and decepyive intelligence from Blacks. Mr Morgan Tsangarai, Actual Prime minister, imposed by the western international communuty. He is oppose to Mr Mugabe polycy of land reform. He's looking to give land back to white people and put black people in bondage.

- Nigeria where président Jonathan Googluk  has just changed the agreement between ethnic Hausa and Yoruba on the rotating presidency. Because of their relative numbers in the country in terms of population. Will they accept the new situation and stance. Anyway, the violence will be  used to change the new procedure with his trail of death. President Jonathan Godluk Former Vice-president to the decease president y'aradua who die mysteriously in a Saoudi Arabia hospital and replace him according to Nigerian constitution. He is not Haoussa nor Yoruba

These elections will be followed by the so called the western international community, but also by the International Black Community. This year is crucial for both sides, whoever loses will lose for good.
All is played this year or « make it or break ». There will be no half measures on one side or the other.


What are the forces at work and in presence ?
There are Western international community (United States, European Union and the new emerging countries of Asia under U.S. control) and their corrupt allies African elites ruling by ams Africa Today their tool ,the African Union and satellite regional organizations such as ECOWAS, CEMAC and SADC which are the side of the status quo;
On the other hand there is the Pan-African movement, the emerging South America countries and China, the side of change.

The fight will be nasty not so easy for either one side. Win or loose no other alternative. There are however competitive advantages in the strategic plan for the camp of change: The international opinion which is for change.
The group of the Western international community relies on violence, killings and occupation of current decision-making power.
The coming months will be painful nasty for many of us who will certainly die or be wounded, but  one thing is for certain change is coming and will take place.
In 12 months  an evaluation.